I am so sorry this coming late. I seriously cannot wait for this book and the cover is so amazing!!! 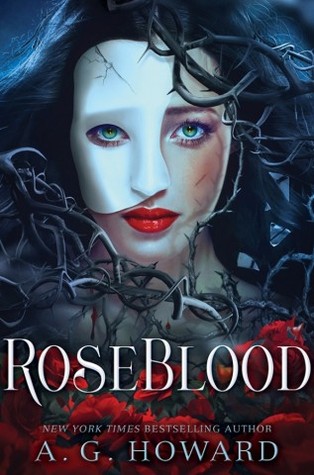 In this modern day spinoff of Leroux’s gothic tale of unrequited love turned to madness, seventeen-year-old Rune Germain has a mysterious affliction linked to her operatic talent, and a horrifying mistake she’s trying to hide.

Hoping creative direction will help, Rune’s mother sends her to a French arts conservatory for her senior year, located in an opera house rumored to have ties to The Phantom of the Opera. At RoseBlood, Rune secretly befriends the masked Thorn — an elusive violinist who not only guides her musical transformation through dreams that seem more real than reality itself, but somehow knows who she is behind her own masks.

As the two discover an otherworldly connection, a soul-deep romance blossoms. But when Thorn’s dark agenda comes to light, he’s forced to make a deadly choice: lead Rune to her destruction, or face the wrath of the phantom who has haunted the opera house for a century, and is the only father he’s ever known.

A.G. Howard was inspired to write SPLINTERED while working at a school library. Her pastimes are reading, rollerblading, gardening, and family vacations which often include impromptu side trips to 18th century graveyards or condemned schoolhouses to appease her overactive muse.

SPLINTERED & UNHINGED, ENSNARED, and UNTAMED, the first four books in her urbanized /gothic Alice in Wonderland series, are now available from Amulet Books. Her Phantom of the Opera spinoff, ROSEBLOOD, is slated to launch January 2017.