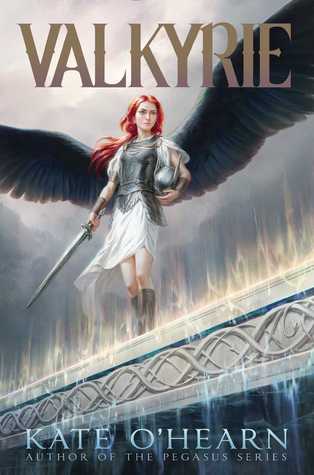 From the bestselling author of the Pegasus books, Kate O’Hearn, comes an exciting new series that puts a fresh twist on Norse mythology.

Valkyrie: Norse Goddess. Reaper of Souls. Defender of the Weak. Not someone you want to mess with…

Freya is dreading her upcoming birthday when she’ll officially have to take up her duties as a Valkyrie. She doesn’t want to follow in the footsteps of the legends before her—legends including her mother and sisters. And she certainly doesn’t want anything to do with humans!

Freya thinks humans are cruel, hate-filled creatures, but as she observes their world, she begins to wonder what it would be like to make friends with the girls or laugh with the boys she sees. And what would it be like to live without the fear that she could cause someone’s death with a single touch?

Then when she’s sent on her first mission, she reaps the soul of a fallen soldier with unfinished business…business that sends her on an epic quest to the mortal world. Will Freya find the true meaning of being a human, or will she finally accept the legend she is destined to become?

I would like to thank the publisher for providing me with an advance copy for an honest review.

Valkyrie is a great middle-grade book with a relateable POV who is trying to figure out what is right and who she is. This book has mythology, action, and humor. It also has a great moral as well. Valkyrie deals with bullying, kids who have absentee parents, alcohol abuse, illness, and loss of family members through death. I loved that you get Thor and Loki and all that you expect from their personalities.

The adventure starts out with Freya meeting a man on her first mission as a Valkyrie. She is to bring the man back to be a soldier in Odin’s army. He is so distrot about his family and thinks that they are in danger. He wants Freya to promise him that she will look after them. Freya knows that she shouldn’t make this promise but she does. Valkyrie’s are not supposed to leave Asgard unless they are on a mission. Freya is going to go and Loki helps her. The consequences if she is found will be severe.

Does Loki have ulterior motives in helping Freya? Will Freya find that the human race is not worth saving or will she find some are worth more than she thought? What will the consequences be for Freya leaving Asgard? You have to read this first book in this series to find out.

Valkyrie was a cute story and very fast paced. It was a quick read and great for any age. I liked it when it was in Asgard because I loved the world and the characters there. Asgard was such a beautifully enriched world. I wanted to live in that world forever! When Freya goes to Earth, I liked it and understood that it was building a moral to the story, and an overall arch but I wanted back to that Asgard and felt they were spending to long on Earth. I wanted to go back to that beautiful enriched world. I really did love the characters created and where the story starts, I can’t wait to read where it goes from here. I am giving this book 3 out of 5 Stars.

People who know me don’t believe it when I say this – but it’s true. I am a very shy and private person! No, really, it’s the truth, I AM SHY! So you won’t see a lot of very personal photos of me or hear a lot of details about my life. Besides, you should be busy living your own life and not reading about mine. BUT if I share anything, it will be my love and concern for animals. Either my pets or ALL the animals on this planet!