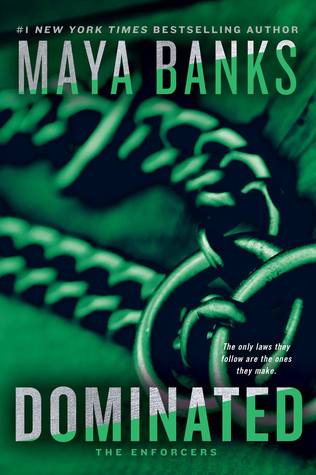 The desire that exploded in Mastered continues its conflagration in Dominated

To save her, he had to betray her…

In Drake’s shadowy world, his enemies would exploit any weakness he had in order to bring him to his knees, and so he’s never allowed himself to care about anyone…never exhibited any vulnerability, and it made him a force to be reckoned with. Until Evangeline—his angel. A woman who slipped past his defenses like no one had ever managed. She was his to protect and ultimately, to do that, he had to do the unthinkable and drive the only good thing in his world away.

But he will stop at nothing to get her back…

Devastated and destroyed, Evangeline doesn’t know what made Drake turn on her in such a shocking manner. She only knows she’ll never be the same. He once freed her from all her inhibitions, only now she is a prisoner to never-ending pain. But when Drake finds her again, she realizes there is more to his world than she ever imagined, and she must decide if she can once more trust—and submit—to the man who holds her wounded heart in his hands. And he must convince her of just how far he’ll go to regain her love and forgiveness.

I would like to thank the publisher for providing me with an advance  copy of Dominated for an honest review.

So many more layers are peeled back in this book, and you get what makes Drake so guarded. Evangeline, aka Angel, will have to see if she can trust Drake and forgive what he has done to her. She is prideful but her love for him and heartbreak are so strong she doesn’t know if she can endure it again.

Angel questions what Drakes true feelings are for her. She keeps telling herself that she can wait and that he is worth waiting for. Drake has never allowed anyone close, and he is worried to trust that people aren’t just with him for an advantage or ulterior motives.

Will Evangeline and Drake’s relationship ever be the same after the trust has been broken? Can they learn to love one another equally or will they break each others hearts? Will Drake’s dangerous world put Evangeline in danger and will she survive it? You have to read this book to find out!

Dominated took right off where Mastered left off, and you have to read the first to read this one. I was drawn in right away and could not put it down until the last page. I love Drake’s men, and especially Silas. I am really looking forward to his story to come in Kept. I really liked Dominated, however, I feel that some things were a little repetitive. I liked the relationship in Dominated better between Angel and the other men than I did in Mastered. I actually really enjoyed it in this book! I would definitely recommend and will continue with the series. I am giving it 4 out of 5 stars.

Get Drake and Evangeline’s story in Mastered and Dominated