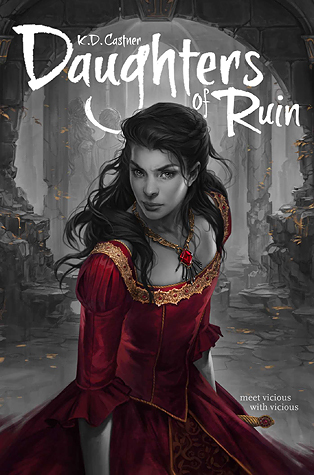 Meet rumor with quiet, treason with cunning, and vicious with vicious.

A brutal war ravaged their kingdoms, and Rhea’s father was the victor. As a gesture of peace, King Declan brought the daughters of his rivals to live under his protection—and his ever-watchful eye.

For ten years they have trained together as diplomats and warriors, raised to accept their thrones and unite their kingdoms in peace. But there is no peace among sisters, and all plans shatter when the palace is attacked. As their intended future lies in ashes, Rhea, Cadis, Suki, and Iren must decide where their loyalties lie: to their nations, or to each other.

Alliances shift and the consequences are deadly in this stunning fantasy debut from K. D. Castner.

I would like to thank the publisher for providing me with an advance copy of Daughters of Ruin for an honest review.

Daughters of Ruin was one of most anticipated reads of 2016 and the synopsis when I read it made me so excited for this book. I have to be honest the book for me did not live up to my expectations. The prologue is over 20 pages and honestly could be summed up in 4 to 5 pages. It was so drawn out. The first 125 pages of the book are relatively boring and not much happens.

I wanted to relate to some of the POV’s but couldn’t. My favorite POV was Cadis, she was honestly the most relateable and least annoying. Suki was the most irritating as a spoiled, brat. Rhea was the one I wanted to connect to the most but just couldn’t. I felt her POV sometimes was cold, and then not, almost contradictory in emotions. The story-line at times made no sense to me and I felt it was not what I signed up for. The second half of the book flowed a little better and did pick up as far as the pacing.

Will the four princesses or so called sisters support each other or will they fight? Can they find peace or will they continue to be divided? Will age and jealousy cause them to betray one another? You have to read to find out.

Daughters of Ruin is a quick read but was not what I was anticipating. The second half, although being faster paced then the first was not enough to save this story for me. I really had high hopes for this book and it just didn’t match what I was wanting. It may be the right book for you I just could not get into it. I am giving this book 2 out of 5 stars.

About this author
K.D. Castner was once a farmer, once in love, and three times almost died in water. K.D. makes blackberry cider and dotes on a passel of grandkittens. A US citizen, she makes her home in Aberystwyth, Wales. Daughters of Ruin is her first novel.

4 thoughts on “ARC Review: Daughters of Ruin by K.D. Castner”