I am so excited to be a part of the Unforgivable Blog Tour. Check out my Favorite Quotes, Review, Excerpt. Also, go to the bottom of the post and check out the Giveaway!

In this raw, gut-wrenching, and beautifully written sequel to Invincible, Marcus continues Evie’s story of their intense romance, a la Gayle Forman’s Where She Went, after saving her life only to find his life—and their relationship—falling to pieces.

Marcus knows pain. The kind that swallows you like a black hole. His brother committed suicide, his mother left him, and his dad mostly ignores him. Relief only seems to come from drugs, alcohol, and secret acts of self-destruction.

Until he met Evie. Together, they lived in the moment. They fell in love—hard—creating their own beautiful world. But they each had their own secrets, their own pain, hovering like a thick fog, suffocating them in a world too small to share.

Unforgivable takes off where Invincible left us—with Evie drowning in San Francisco Bay. Marcus finds her just in time, but her survival is not the happy ending he was hoping for. Forbidden from seeing Evie by her parents and unable to reach her, Marcus learns of a pain that might break him completely.

Marcus spirals into an even deeper darkness and is forced by new events to face the demons of his past. The pain of losing Evie becomes tangled with the loss of his mother and brother, and he must finally face the ghosts he has been trying so desperately to outrun or risk losing Evie forever.

I would like to thank the publisher for providing me with an advance copy of Unforgivable for an honest review.

Unforgivable is a second book that packs a punch. Invincible left me on the edge of my seat with a huge cliff-hanger. I was dying to see if Evie’s mistake would lead to consequences that her and Marcus would never be able to take back. Invincible was from Evie’s perspective but Unforgivable is from Marcus’s perspective. This was a nice change because we had so many questions after the first book about his past. Unforgivable deals with abuse, addiction, and healing. Can someone help you heal or do you need be apart to heal yourself?

Can love survive addiction? Do you put yourself first or someone you love? Can you save other people? You have to read this book to see the choices that these characters make when answering these questions.

The flow of words were so poetic, and the deep subject matter had me devouring every line. This book was such a great addition and I would have even loved it to be longer since I flew through it so fast and it seemed a little short to me. I would definitely recommend both books and I am giving this book 4 out of 5 stars.

They are the scars that tell the story of my mom leaving and of David dying. They are the physical proof of a pain so huge I could not keep it inside my body.

The only thing that can take away this pain is a different kind of pain.

But maybe it had nothing to do with me. How often were we actually sober together? Does our love even count? Maybe your feelings were only chemical concoctions. Maybe you never loved me at all; maybe you fell in love with your own chemistry.

You heard death calling you, luring you back to it with candy. You tasted it, devoured it, then spit it back out just in time.

But now what? What do you hear? Can you hear anything besides your own voice?

You never asked to be a miracle. 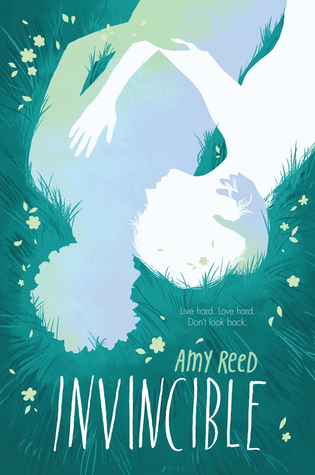 Follow the Unforgivable by Amy Reed Blog Tour and don’t miss anything! Click on the banner to see the tour schedule.

Amy Reed was born and raised in and around Seattle, where she attended a total of eight schools by the time she was eighteen. Constant moving taught her to be restless and being an only child made her imagination do funny things. After a brief stint at Reed College (no relation), she moved to San Francisco and spent the next several years serving coffee and getting into trouble. She eventually graduated from film school, promptly decided she wanted nothing to do with filmmaking, returned to her original and impractical love of writing, and earned her MFA from New College of California. Her short work has been published in journals such as Kitchen Sink, Contrary, and Fiction. Amy currently lives in Oakland with her husband and two cats, and has accepted that Northern California has replaced the Pacific Northwest as her home. She is no longer restless. Find out more at amyreedfiction.com.