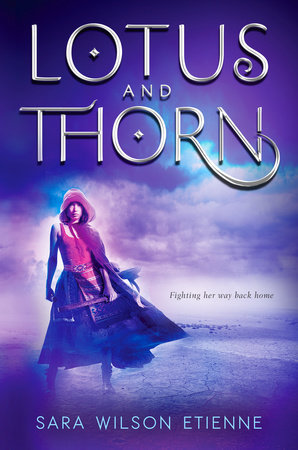 Ravaged by a plague known as Red Death, the planet Gabriel, a former colony of Earth, is a barren wasteland. Since being abandoned by Earth 500 years ago, resources are scarce and life is cheap. To stay alive, the survivors, the Citizens, scavenge the remains of a now dead city, trading for food with the resource-rich Curadores, the only other survivors on Gabriel. Every old computer, every piece of wire, every scrap of metal counts. To steal is the ultimate sin. So when tough-as-nails seventeen-year-old Leica is caught doing just that, she’s exiled and left to the mercy of Gabriel’s unforgiving desert for the rest of her life.

While in exile, Leica discovers a mysterious shuttle, which may not only lead her home, but even more impossible—reestablish contact with Earth. Then Red Death rears its head again, killing her entire work crew, leaving Leica all alone until a handsome Curador offers her refuge in the Dome—the only place on Gabriel untouched by Red Death, where a decadent and sultry life awaits. But there’s a catch: Leica can only enter the Dome as his concubine—his Kisaeng. When a rogue group of Citizens see their chance for revolution in Leica’s good fortune, she finds herself unraveling a deadly mystery with chilling answers to the true origin of Red Death and the reason Earth really abandoned them so long ago.

A richly imagined fantasy in the vein of Tamora Pierce, Lotus and Thorn, is a magnificent, epic adventure.

I would like to thank the publisher for providing me with an advanced copy of Lotus and Thorn for an honest review.

Lotus and Thorn is marketed as a fantasy book and it definitely is not. This is where a lot of my conflicted feelings came in. I read the synopsis before I read the book and was expecting something different. I waited the whole book for that element that would give me just a hint of fantasy but it never came. It is a great science fiction book. It has disease, labs, technology, and experiments, all the elements for a really good sci-fi. I enjoyed it, I just wish I had been in that mind set for that when I started, and not searching for something that would not come. I was expecting something a little different but still got a great book. I am saying all of this so others can go into the book and know what the book is about and just enjoy the journey with out other expectations. It has great elements and fierce characters with interesting twists.

The prologue starts with the three sisters living in this community until one day Leica does something that gets her exiled and separated from them. Leica was always considered corrupt since she was young. She has six fingers on each hand. Any imperfection is considered a corruption.

Leica has been out in the desert for 657 days since her exile and so many around her keep dying of the Red Death. Red Death is a nasty plague that sweeps in causing fever, bleeding and then death at a fast rate. Leica is soon left all alone and running to make sure that the dangers of the desert don’t get her before she can gain strength.

With Leica having made an unexpected discovery she is worried about trying to get back to that discovery before others find it too. Edison, a handsome man from inside the dome says he will help her.

With so many elements to overcome in the desert, can they get back to what she is looking for? Can she really trust Edison? Will Leica ever see her sisters again? You have to read to find out.

Lotus and Thorns has suspense, intrigue, some romance, and cool technology.The world building in this book is incredible and you can see the many steps that Leica takes on her journey. I loved all the fighting and action and that Leica was a tough, strong girl. I did think that the pacing was not always even and I thought some of the book could have been cut down. Overall I did like this book, and I am giving it 3.5 out of 5 stars. 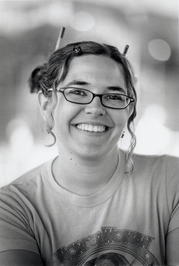 Sara Wilson Etienne went to school to become a marine biologist… but when her research transformed itself into a novel, she realized she loved fantasy more than fact. Now she enjoys combining both to create stories that ask “What if?”

Sara writes in Seattle alongside her artist husband and her two dogs. Her favorite days are spent disappearing into different universes, whether it’s traveling with Dr. Who, popping into a parallel world with Diana Wynne Jones or Terry Pratchett, or writing her own stories. Or sometimes just taking a nap.

Sara is the author of HARBINGER and LOTUS AND THORN.