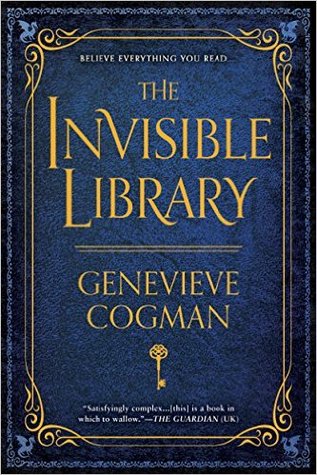 Collecting books can be a dangerous prospect in this fun, time-traveling, fantasy adventure from a spectacular debut author.

One thing any Librarian will tell you: the truth is much stranger than fiction…

Irene is a professional spy for the mysterious Library, a shadowy organization that collects important works of fiction from all of the different realities. Most recently, she and her enigmatic assistant Kai have been sent to an alternative London. Their mission: Retrieve a particularly dangerous book. The problem: By the time they arrive, it’s already been stolen.

London’s underground factions are prepared to fight to the death to find the tome before Irene and Kai do, a problem compounded by the fact that this world is chaos-infested—the laws of nature bent to allow supernatural creatures and unpredictable magic to run rampant. To make matters worse, Kai is hiding something—secrets that could be just as volatile as the chaos-filled world itself.

Now Irene is caught in a puzzling web of deadly danger, conflicting clues, and sinister secret societies. And failure is not an option—because it isn’t just Irene’s reputation at stake, it’s the nature of reality itself…

FEATURING BONUS MATERIAL: including an interview with the author, a legend from the Library, and more!

I would like to thank the publisher for providing me with a copy of The Invisible Library for an honest review.

The Invisible Library has magic, mythological creatures and parallel worlds, so many great things!!! I loved the concept of this book and that it starts right in the midst of the action. I am a huge fan of anything involving fae or dragons, then you add librarians and I am so excited.

I did feel there are a lot of elements in the book and it takes time to catch on. The ideas in the story-line are complex and it took me awhile to get into the flow and be able to absorb all of the details and elements. But at about a third of the way through I was so drawn in and so glad I kept reading because solving the mystery and the twists made me so excited that I continued on the journey.

Will Irene and Kai be able to find the Grimm book that is missing from the Library before other opposing enemies do? Who can Irene trust in her quest?

Genevieve Cogman got started on Tolkien and Sherlock Holmes at an early age, and has never looked back. But on a perhaps more prosaic note, she has an MSC in Statistics with Medical Applications and has wielded this in an assortment of jobs: clinical coder, data analyst and classifications specialist. Although The Invisible Library is her debut novel, she has also previously worked as a freelance roleplaying game writer. Genevieve Cogman’s hobbies include patchwork, beading, knitting and gaming, and she lives in the north of England.